The 7DRL version can be downloaded as a standalone release, the web version contains some balance and bug fixes for a better experience.

Something sinister is afoot within the System and the Administrator entrusted you to stop the Corruption before it’s too late.

Evilware is a classical roguelike made in Godot for the 7DRL 2021 challenge, so be prepared for a lot of dying but hopefully also some re-playable fun.

The Music may not work on all browsers! If you experience stuttering please give it a moment for the stream to catch up or lower the volume from the options menu.

Changes from 7DRL version (you can still play the original version from the downloads section as a standalone Windows executable):

I'm pretty sure that I abused some imbalance and bugs, but (continued below): 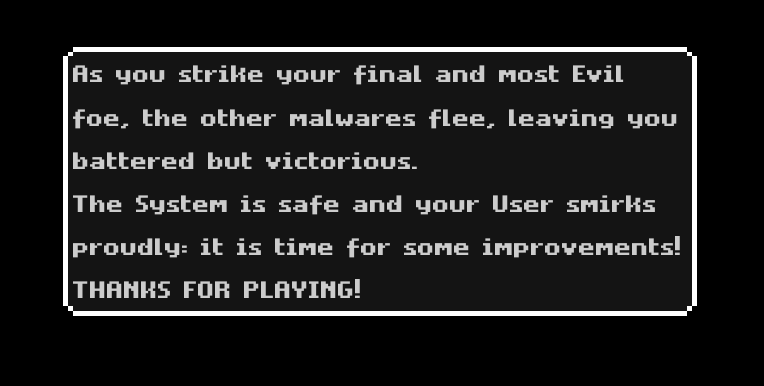 I liked the various types of enemies (worms! trojans! and the one turning programs rogue, that's very much what Mr.Smith did all of Matrix: Revolutions) - what software threat do the snakes stand for?

I think there are still some bugs (or at least thing I don't understand) - like, is defrag supposed to have a cooldown like the other hacking abilities? In my case, I just used it endlessly without skipping a turn or getting it cooled down, but then I used some other hacking skill and it put them all, including defrag, on cooldown.

The skill menu sometimes reported skills as unavailable even when I had enough bits - my impression was that the logic of unavailable tag wasn't quite right.

Sometimes I attacked empty spaces instead of moving into them, as if the game believes there is something in there.

As for imbalance, I reached the final boss with all skills unlocked and 200 bits in the pocket - he succumbed in two hits :D  Had fun regardless - lots of interesting content here to enjoy!

Thank you once again, I am happy that you enjoyed the game! The invisible enemies were probably Spywares, the masked guys that appear only if the do or receive damage, but if they die immediately I guess they never show up.

I will work on your notes to improve the game, they are very appreciated!

Cool concept of translating OS management into a roguelike :)  I like the "squash one bug, two more pop up" logic.

I haven't been able to figure out some stuff, but not sure if I'm not understanding the game or those are bugs:

- Whenever I reach a compiler, I can't learn any new skills. It says I can click on a skill to see its description, but clicking doesn't seem to do anything (either on skill names or on Implement button).

- Every time I reach /tmp, the annoying network things kill me off in a weird way: once I attack them, they teleport away, but they still seem to be damaging me from the cell they used to stand on.

Hi, thanks a lot for playing and taking time to comment!

Since the Jam Reviewers need access to the 7DRL release, I didn’t want to overwrite the current one with a bugfix, as having a second zip to run locally is troublesome for the player (you need a local server, a browser alone won’t do).

If you are interested I can upload an executable with the fixes for Windows, Mac or Linux (though I cannot test the latter two).

> The compiler only shows skills you can purchase

How much do they cost though? I had like 20+ bits and still nothing was selectable.

> Since the Jam Reviewers need access to the 7DRL release

I've seen a suggestion to update the browser version, but leave a detailed changelog of fixes for the reviewers to be able to gauge how much has changed since 7DRL release - then they can take off points in Completeness if you ended up fixing a lot of bugs, but can at least explore more of the game to leave a fair rating :) I'm happy to play the local version as well, if you'd rather not go with that!

I have updated the web version with the fixes and kept the original as a downloadable executable.

Thanks for commenting and giving me a reason to improve :) 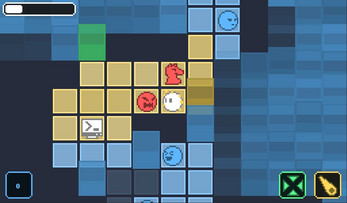 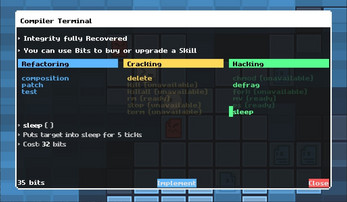 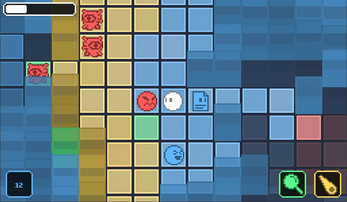